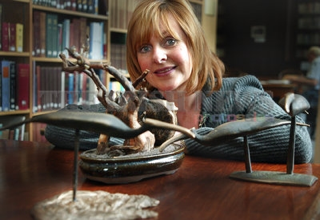 Grace Digney is an Irish artist who enjoys exploring a variety of media and ideas and believes that art is for everyone; we all have art in us in one form or other.

Grace studied Art at University of London and also holds an M.A. in Fine and Applied Art from the University of Ulster. She also taught art at both second and third levels for a number of years in Ireland and Australia and was director of an Environmental Conservation Centre in Northern Ireland. Her work can be found in the collection of St. Louis Museum, Missouri and Queens Uni. and has been televised by UTV, TG4, and RTE. Grace took part took part in  the ‘Sound Scene’ Festival at the Hirshorn Smithsonian in Washington and currently working  on Art &Sound projects with Cambridge Lab.MIT Boston.

Keen to develop more rounded sensory art experiences, Grace became interested in ‘Sound Art’. She produced a range of art work using visible patterns in response to sound on apparatus called an Eidophone. The patterns are produced from vibrations of speech, song or music played through the apparatus.

The apparatus was originally invented in 1885 by a Welsh soprano singer Margaret Watts Hughes and more recently recreated &refined by Malin Starretts D.Phil(Experience of Experiments,N.Irl).

What Grace Has Discovered

For the past ten years Grace has been exploring the relationship between sound, science and art through the Eidophone. This exploration was enhanced by involvement with a number of educational establishments such as Queen’s University Belfast’s Sonic Arts Centre and Trinity College Dublin’s Science Gallery.

This equipment has practical applications in developing singing abilities, in speech therapy and in helping those with hearing disabilities to develop their speech.

What Grace has discovered through using the apparatus at events and festivals was that it appeals to people of all ages and abilities. She’s heard and seen it all from operatic singing to bodily sounds and laughs.

Always one for a good laugh herself, Grace has found a way to capture it visually and make it last. From printing T-shirts at festivals, e.g. Electric Picnic, Hearsay Audio festival and Inspirefest, to more serious artistic endeavours, the Sound Shapes prove very versatile.

Exhibiting all the facets of her exploration with the Eidophone, the resulting interaction would show that there is an artist inside all of us.